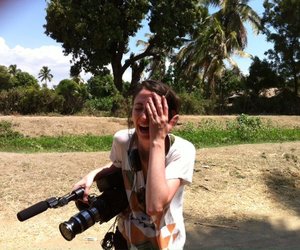 Ashley Panzera is a documentary filmmaker and photographer based in Brooklyn. At the age of 26, she has worked on the following films: Arts Engine’s latest documentary features, (A)sexuality: The Making of A Movement (premiered at Newfest and has since screened internationally) and Pushing The Elephant  (premiered at Human Rights Watch and selected as a POV film). With a focus on social media, and collaborative works, Ashley is rooted in the NYC Documentary community as a selected fellow for Uniondocs Collaborative 2010-11 and an active participant in the Brooklyn Filmmakers Collective.

Currently, she is spending time in Port-au-Prince, Haiti with a radical newspaper shooting her directorial debut, Noise Runs.