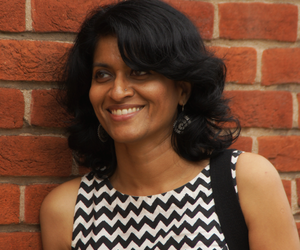 Chithra makes intimate films about identity, human relationships, race, art, and health. She is the marketing co-chair for New Day Films, a member-owned distribution cooperative. Her first exposure to filmmaking began with a failed attempt to fund a film in India. Deeply affected by that experience, she quit a decade-long career as a Physical Therapist and got an M.F.A in film production from the University of Texas in Austin. Her thesis film Mijo aired on KLRU TV and played in 50 film festivals around the world. Foreign Puzzle, her first long-form documentary is distributed by New Day Films. She edited the episode Symbolic Justice for CBSN Original series Speaking Frankly and the Sundance supported mini-series, America in Transition, about trans people of color. She taught documentary production and post-production for five years at the Documentary Center at GWU in Washington D.C. and Arlington Independent Media. In the near future, she hopes to direct narrative features and fantastical episodic content. She is an avid runner and has completed 14 marathons. Food is her first love.

Currently, she is making Our Daughters, a feature documentary that examines open adoption in America through an immigrant lens. A single white mother makes a bold departure from the norm and chooses an Indian American couple to be her twin daughters’ adoptive parents. Now, the eight-year-old twins want to meet their birth mother. The film captures what unfolds during the visit and explores the construct of a family.  Stage: Late production/Early Post-Production. Supported by: CAAM, NYSCA and Jerome Foundation Selected: Sheffield Meet Market, IFP Documentary Lab, IFP Week, DOCNYC Only in New York. Seeking: Co-production and Finishing Funds

1001 Breast Cancer Nights: an online portal of breast cancer stories from India: vibrant tales of medicine, myth, stigma, survival, romance, tragedy, comedy, and artistry. It will improve the understanding of the disease, and the quality of life for survivors. Stage: Post-Production/Prototyping Supported by BAVC Media Maker Fellowship, Made in New York Fellowship, the Lancet Development Award, and the Creative Arts Fellowship from American Institute for Indian Studies. Seeking: Finishing Funds and User Interface Designer.