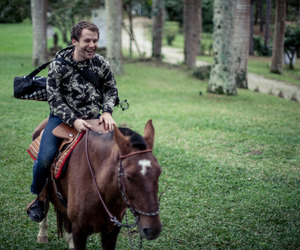 Ethan Goldwater is a filmmaker whose work builds on his prior careers as a journalist in San Francisco, and as a public middle school teacher in NYC. His short film the Last Waterman of Wittman was selected as a Vimeo staff pick in 2011 and played at film festivals around the world. In 2013 he founded Hover Pictures, a production company dedicated to making explorative work and supporting directors to bring new films to life. From 2013-2018, he EP'd, directed and shot several episodes of the Unsung series. In 2014 he produced the Long Road Home, a half hour TV doc about double amputee tractor puller Larry Koester. His independent short film Lady Bountiful premiered at SF Indie Fest in 2017 and is currently being broadcast on KQED’s series Truly, CA. In 2018, he directed an episode of Equally Obsessed for Canon, featuring Justin Aversano's Twin Flames project. In 2019, he co-directed CovenantVR with Gary Yost. His first feature documentary CURA was selected for IFP Doclab in 2016 and is currently in post-production.