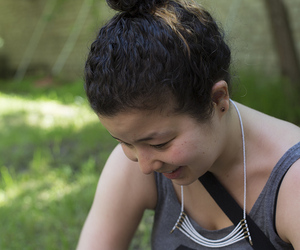 Jessica is a Chinese-American director/producer named one of 25 New Faces of Independent Film by Filmmaker Magazine and is a DOC NYC 40 Under 40. Her first feature documentary, the upcoming UNTITLED PRC PROJECT, has received support from organizations including SFFILM, Chicken & Egg, Cinereach, Sundance, and Field of Vision. She is currently a Firelight Media Fellow. Her award-winning short documentary "Commodity City" (2017) is an observational documentary about the world’s largest wholesale mall. It played at over 50 film festivals, was shortlisted for a Cinema Eye Honor, and is a Vimeo Staff Pick. She co-directed “It’s Coming!” (2020) which is supported by Rooftop Films and is a Vimeo Staff Pick, and “Routine Island” (2019), an Eyeslicer Radical Film Fund recipient. Past residencies include the Points North Institute Editing Residency, the Artist Academy at the New York Film Festival, the UnionDocs Editing Residency, and the UnionDocs Lab. Producer credits include “Born To Be” (dir. Tania Cypriano, NYFF 2019), “The Waterslide” (dir. Nathan Truesdell, True/False in 2018), and “Old Stone” (dir. Johnny Ma, Berlinale 2016). She received her BA in Film Studies from Columbia University and her MA in Media Studies from The New School.